Its been a little over three weeks since the Obamacare exchange website, healthcare.gov, was opened to the public. In case you didn’t know, those who are required to, have until December 15 to sign up for Obamacare or pay a penalty (aka TAX). So how, exactly, do you sign up for something on a web site when the web site doesn’t work?  Want to take any bets that the website will still be broken by the December 15 deadline? This reminds me of a good book that no one in the business of writing code should be without: Death March by Edward Yourdon 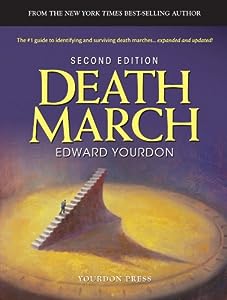 This is Amazon’s description of the book:

Historically, all software projects have involved a certain degree of risk and pressure – but many of the projects in today’s chaotic business environment involve such intense pressure that they are referred to colloquially as “death-march” projects – i.e., projects whose schedules are so compressed, and/or whose budgets, or resource (people) assignments are so constrained, that the only “obvious” way to succeed is for the entire team to work 16 hours a day, 7 days a week, with no vacations until the project is finished. While the corporate goal of such projects is to overcome impossible odds and achieve miracles, the personal goal of the project manager and team members often shrinks down to mere survival: keeping one’s job, maintaining some semblance of a relationship with one’s spouse and children, and avoiding a heart attack or ulcer.

It’s not that the web site developers were short staffed, or that they were short of money.  How much was spent on this FUBAR-ed web site?  $94+ million?  No, what the problems point to is poor management, engineering and development.  There is no amount of money or engineers that can be thrown at this project that will correct it as the problems run far deeper than that.  As Yourdon’s Death March points out, this approach will only add to the confusion and make matters worse.

Sit back and watch the power of a clueless bureaucracy at work folks.  This is going to get ugly.